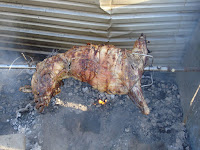 The best man at my wedding, a chef and cooking mentor, and a stinking New York Yankee lover, roasts whole animals every March in celebration of his patron saint. I admire him for it. The work involved is tremendous, fortunately we were only doing the sides for tonight's roast and helping with the carving. I couldn't help but think of Patrick watching the hypnotic rotation of glistening lamb meat. Even drank a Sierra in his honor.

Local raised spit roast lamb. Can't get much better than that. Fortunately the sides were a terrific compliment. And the bacon in the spinach salad blew my mind. Local butcher, non usda certified, lordy it is good. Thanks to Ray for the lamb and bacon purchase. I can die a happy man after that bacon. 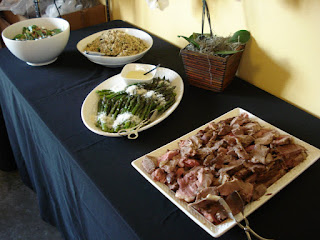 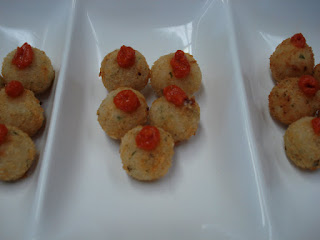 82 Whitman grads gathered to celebrate their 40 year reunion at Three Rivers Winery. How did they seem to know each other so well after 40 years? Certainly the Whittie Experience must be a tad different than mine at gigantic UC Davis. I can just imagine me at my 40 year reunion. "Nope, don't know you, nope, not you either, can't recall your face from the other 4,500 graduates of 1996... sorry." Even a reunion in my major would produce very similar results.

The food. Big highlight tonight, rissotto balls stuffed with cheese, fried and topped with a sun dried tomato sauce. Guests were waiting by the kitchen entrance to snatch them up. And if there is a better pork roast in the world than the one we are copying from Zuni Cafe in San Francisco I would like to try it.

Cheers
Posted by John and Becca at 11:09 PM No comments: 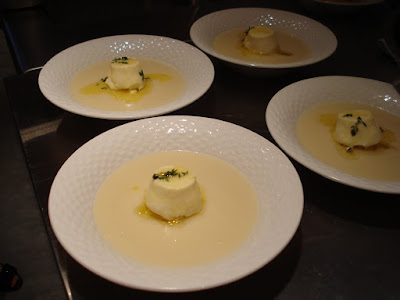 Thirty six gardening buffs from the west side of the Evergreen State wreaked havoc and destruction over the weekend of April 19th. We were lucky enough to feed them.

We rented Carnegie, the wife built some very agreeable tulip centerpieces, Sean from Water's Winery was our guest sommlier, and we tried to impress with the food.

Wines to match: Stella Blanca semillon, Waters voigner, Waters syrah, Northstar syrah, Three Rivers Gwertziminer (or however the hell you spell it!).
We don't like to brag, but... pretty yummy.

Edward Jones threw a barbeque for tax professionals and other hanger-on-ers April 15th. We got to cook for the people who save us money and untangle our financial record messes.

I was out of town visiting our nicu bound newborn (Frances, cute as a button and home now!!!) so my two associates Nick and Avel put on a great show.

Cheers
Posted by John and Becca at 11:00 PM No comments: 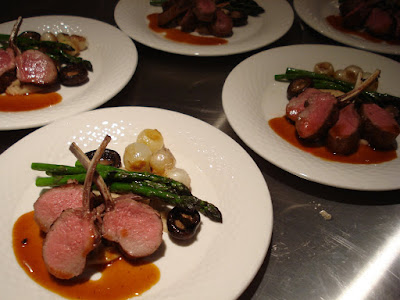 I love Reininger. The owners, the staff, and the wine is pretty darn awesome.

Dinner for eight. Tracy laid out a beautiful table setting, per usual. 3 apps, my favorite being a seared scallop half, with caramelized apple and crisp bacon, laid out on spoons for easy snacking (and dramatic effect).

My favorite part of tonight's meal had to be the mushroom sauce. I made a duxelle, then infused chicken stock and cream with the duxelle. Strain, reduce, reduce, reduce... tasty.

Cheers
Posted by John and Becca at 10:27 PM No comments: