Cheers
Posted by John and Becca at 2:13 PM No comments: 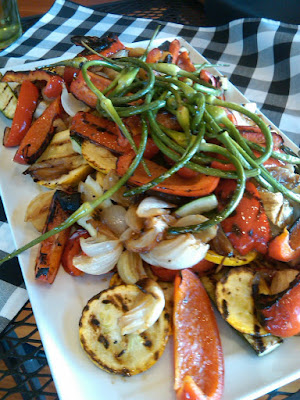 Palmares is a cycling term meaning a list of great accomplishments. Our version of palmares.
"John, Thank you for catering our event on Saturday. The food that you provided was fantastic and our guests really enjoyed it. You and Pete did a great job putting the menu together. The cook that was on site also did a great job." - Zuzana (Bellevue Athletic Club Tour, lunch at Reininger and appetizers at Dunham)
"Dear John,
We are so appreciative of the wonderful lunch you prepared for our wedding at Grant House. The entire menu was fabulous, with such wonderful attention to detail. From the fresh vegetables (those heirloom tomatoes--oh, heaven) to the delicious dolma to the outstanding flank steak skewers (I think several people wept at the experience of eating them) everything was perfection. Our guests loved their meal and your ears must've been burning from all the compliments. You made our special day all the more special. Thank you for everything. I really look forward to eating your food as soon as I can. We will certainly recommend you to anyone looking for the best." --- all best, Marie and Rick (Wedding luncheon for 50) 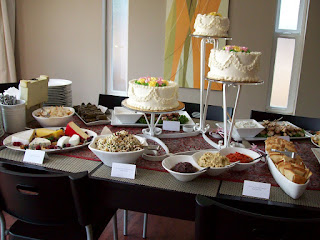 "Hi John: Thank you so much for all you did for our wedding. It really was a perfect day for both of us, and we received rave reviews about the food, so many thanks to you and your crew on that end." -- Carrie and Dean (Wedding at Mill Creek Garden for 120)

"This morning our folks were still talking about last night's dinner. The food and your staff were wonderful!" --- Amanda, Washington State Dental Association (Basel Cellars Buffet for 60) 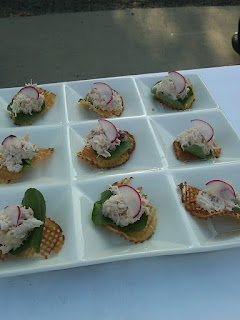 "We all thoroughly enjoyed it. One couple in our group is relatively new to me. I didn't know he doesn't like beets and she dislikes lamb. He ate every single beet and loved it and she still hasn't stopped talking about the lamb. She usually eats half of what is on her plate for weight loss, but licked it clean. Two converts!" --- Zari (Dinner for 12, five courses, at Reininger)
New Favorite Things:
Cheers
Posted by John and Becca at 12:27 PM No comments:

Time flies... when you are busy.

My father reminded me the other day I haven't posted anything on the blog in a while. When he named the date, June 22nd I realized two things. 1) My parents pay more attention than I think, and 2) that was a long long time ago.

So here is what Graze Catering has been up to the last month and a half.

Shanna got hitched at a private residence and we did a family style dinner under a big old tent and a pretty blue sky for a bunch of people. And Caitly and her beau tied the knot and partied down at Mill Creek Garden.

The Columbia County Grain Growers ate a bunch of prime rib at their annual meeting, and the Farm Credit folks let us grill up some tasty meat at Mannina Cellars for their special guests.

Prescott High School held their annual all class reunion and Reininger hosted some folks for a good old fashioned hootenanny. Rachel's daughter had a reheasal dinner on the Fourth of July, and the folks at Con Agra had us back to do a posole feed for their entire work crew. Then we went back to Reininger for a WSU event, and then back again for a really fun and yummy intimate dinner.

What Now Productions let us cook lunch and dinner for an entire month for a movie shoot, Leah got married at Mill Creek Garden, Kristi got married at the future site of Reynvaan Family Vineyard, Sykes had us do a company bbq for 800 employees, Washington Dental Association ate like kings at Basel Cellars, Carrie and Dean tied the knot at Mill Creek Garden, Nikki bound herself in matrimony and threw a big old party at Assumption Parish Hall, Tracy's daughter tied the knot and we cooked it up at Three Rivers Winery, Shakespeare UnCorked let us host their pre-opening night dinner, and Rick and Marie hitched up and had us do a really pleasant luncheon.

Somewhere in there the family went camping in Hood River, the wife and children went to Portland, the wife and I escaped without children to Joseph OR for one glorious and peaceful night, my softball team reached the championship game before losing in heartbreaking fashion, and I missed the 2009 Walla Walla Wiffleball Tournament due to a very special wedding (even though I vowed to cater and win the thing last year, I re-vow for 2010).

And just this last week a space came up for lease downtown... there may be a few more hours in the day.