I made a New Year's Resolution January 1st, 2016.  It was this, "cook a new recipe from one of the countless cookbooks we have randomly stacked all over the house at least once a week".  My resolution was brilliant, it would make me a better cook, use an underused resource, and be fun.

I think I cooked 5 new dishes all year.  I failed miserably.  But here are the 5 I did cook, they were so good I remember all of them vividly.  Regret is gnawing my insides for the lost recipe trials of 2016.

The potato leek soup was stellar, Ferran Adria's book The Family Meal.
The lamb with whole grain mustard and mint, also Ferran, so simple, and rich.
Ribs from Stephen Raichlen's Project Smoke, best ribs ever.
Brisket from Stephen as well, also best brisket ever. (Bbq is such a black hole, so few ingredients, so many tiny variables, no wonder people get sucked in.  After this brisket and those ribs I was like "how do we open a bbq restaurant?")
And Muhammara from Anna Jones' - A Modern Way to Eat.  (my wife is in love with this cookbook, so far everything she has made has been great)

So Muhammara, which I am pretty sure I have had only once, at Saffron here in Walla Walla, is a roasted red pepper and walnut spread.  It is a little sweet, and a little spicy, and a little savory, and it has that umami coat your tongue with goodness thing from the walnuts (and the ground wheat bread in it adds a nice pureed gluten on the tongue thing).

I was so impressed with this Muhammara stuff I told our kitchen crew we had to get it on the menu.  After a few attempts we bastardized our Butternut Squash Panini into the CCB (Cauliflower/Carrot/Butternut).  We high heat roast cauliflower and carrot batons until caramelized, we roast and smash butternut squash, and then assemble on italian bread with a schmeer of pureed roasted garlic.  Two sliced of provolone and Wa - Laa.  The Muhammara is served on the side.  It is so delicious.  It is thick, but easily spreadable, and way more fun to put on the sandwich as you eat it, than have our cooks put inside the sandwich. 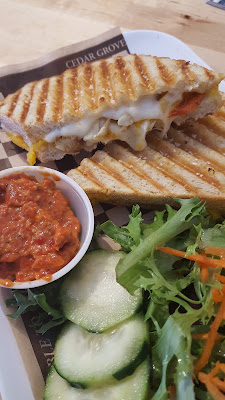 The trial runs and mini special trials we have run at the sandwich shops have been a big hit.  So today we put it on the menu for real.  Downtown Walla Walla, Kennewick, and Richland will all serve it until we hit Spring and we put the Asparagus Panini back on.

Thanks for eating sandwiches.  Cheers