We had the pleasure to make a few appetizers we haven't done in a while.  First up, a decidedly non-winter app that a client insisted we make... sometimes I am so glad we do things we would not normally do.  She said she wanted some goat cheese and sauteed vegetables with crostinis.  So we found these little green zuchinni and sliced them into thin rounds and just super quick sauteed them in olive oil.  Then we hard sauteed some red peppers and piquillo peppers and added really large thinly sliced garlic.  For the goat cheese we pureed some basil with lemon and salt, and then whipped up a batch of goat cheese mousse.  A new favorite for anytime of the year.  Thanks for the inspiration Julie! 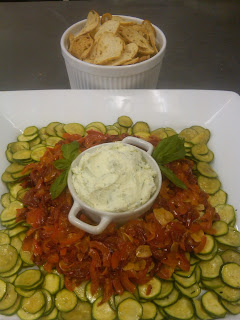 A twice baked red potato, filled with yukon gold pureed potatoes, with cheddar and pepperjack cheese, bacon, and chives, topped with paprika.  So yummy all Brian and I could do was think of breakfast.  So we popped an egg yolk in the hollowed out and roasted potato, topped it with some bacon and chives, and baked it in the oven for a few minutes... until the yolk was barely set... and it gushes all over the plate when cut into.  Yeah, it was one of those kitchen moments of bliss. 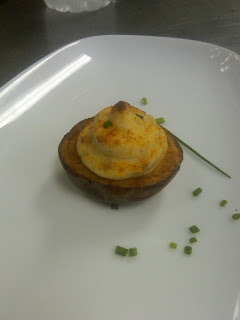 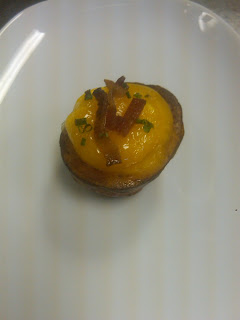 Who doesn't love a good Thai spring roll?  Here is the ingredient list for our spring rolls.  Rice paper wrapper, somen noodles, rice wine vinegar, mixed greens, finely shredded carrots, mung beans, clover sprouts, cilantro, basil, and mint.  Packed with flavor they are super tasty.  Although pretty much everyone in our kitchen hates making them, they are time consuming beyond belief with that many ingredients.  We serve them with sweet chili dipping sauce and/or our homemade peanut sauce (you know that gloppy kind that reminds you of wallpaper paste but coats your mouth with peanut butter and hoisin flavor... not that kind.)  Our peanut sauce is a puree of sauteed red torpedo peppers and garlic and cilantro stems, peanut butter, lime, salt, and coconut milk.  Its fantastic. 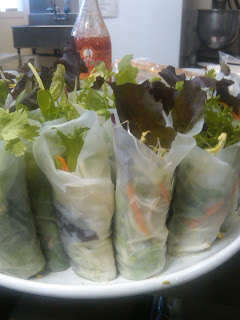 A dim and bad photo of our fall dessert tartletts.  Pumpkin pie and chocolate pecan pie. 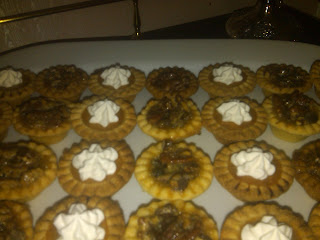